Mmmm? Hmmm? Mhmm? Oh, sorry! You just caught me snacking on a marmalade sandwich there. It doesn’t happen very often now see, as I’ve grown up.

Too old for marmalade sandwiches? Never! It’s 2014/15, Paddington is all new, shiny CGI and more a bear cub than a teddy bear. Not that I minded. Most might relate better to something closer to reality than a bumbling cuddly bear in red welly boots when humour’s involved. Instead of my parents taking their niece, they took the one they’d read Paddington to – me – after much nagging but after such a re-immersion in my own childhood I came out all warm and fuzzy (despite the December cold!).

The jokes and humour throughout the film smelt suspiciously like predictable slapstick comedy moments; flooding baths, sellotape and worst of all toothbrushes. That last one had me laughing and gagging at the same time! Every-time the kids fell quiet the adults would start. Jokes that are funny for kids and adults (and for polar opposite reasons) are hard to come by but Hugh Bonneville’s Mr Brown dressed up as a cleaner who is then hit on by the overly ‘affectionate’ employee of the Geographer’s society… It had everyone in stitches: innuendo and silliness all rolled pleasantly into one ridiculous moment. Such a silly moment then translates into the larger narrative, where the Browns need Paddington as much as the bear from deepest Peru needs the Browns.

The acting is pitch perfect across the whole cast; Nicole Kidman plays a perfectly villainous Millicent, Ben Whishaw’s voice for Paddington just makes you want to tip your hat then squish him in a great big hug and Julie Walter’s Mrs Bird could have walked straight out of the book on to the screen it was brilliant. I wanted more screen time for Peter Capaldi’s splendidly creepy neighbour though…

I loved the intro with Aunt Lucy and Uncle Pastuzo in deepest, darkest Peru. It’s useful as a tool for kids who’ve not yet read Paddington and for those who might know of those two bears as the back story and love them just as much it rouses a smile. Granted it is a plot device, with the explorer being introduced, leading to Millicent’s scheming but its enough and can we all have marmalade day?! Please?

All of this makes me wonder what planet the BBFC were on when they classified the film. Too put it in the same category as ‘Night at the Museum 3’ and give ‘Tinkerbell’ a Universal rating? I’m sorry, the dinosaur is sitting still in this one and where’s the sword play? Yes the films not exactly squeeky clean but its done in such a way that its wholy innocent, completely silly and just funny!

A film to watch, no matter how old you are. We all have a small child tucked away somewhere behind all the adult reasoning and responsibility.

A complete aside but seeing as London sprouted quite a few of its familiar, furry friend throughout November and December on the now complete Paddington Trail. These are the ones I spotted on my travels. 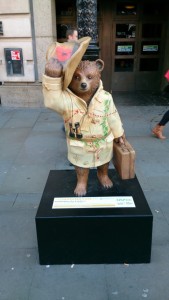 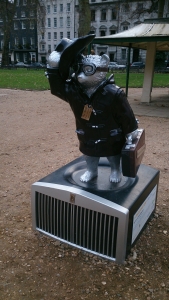