In the spirit of passion, community, celebration, hardworking players and steadfast supporters, the next few weeks (rugby world cup 2015) are about sharing the love of rugby. A sport for the people as much as the players, it captures the idea of nationhood in a way most other sports and sporting events couldn’t dream of, the exception to that rule is probably the Olympics.

Rugby games create a community that is at once temporary, but also long-lasting. Whether you watch it in the pub or are sat in the stadium with friends, and with strangers.

Blending my passions for rugby and creative writing, I took up my pen six years ago as part of Master’s education and did my best to capture what I have seen, felt and experienced over the years. It is only now, with the World Cup on my doorstep in London and across the UK and with the advice of friends ringing, am I shining daylight in some dusty corners.

These are poems about people and rugby, not just the sport itself – though turning a rugby game into poetry is incredible in the magic it generates. #poetryinmotion is definitely the phrase.

A Match day out – for everyone who finds themselves in the pub come a rugby game. For the friends who religiously argue over which players are better and how the game will pan out. Also the fact that this isn’t a sport just about the winning – it is about the players, the team and the supporters behind them being proud no matter what. About a camaraderie with the opposition, making fleeting friends and having an amazing time and proving people wrong.

Touchstone – this one’s for me. I loved uni, I had the time of my life, but I transplanted myself 200 miles away from home. Rugby was a constant, a touchstone and it gave me comfort and a way to make friends.

Legendary Stories – dedicated to the man who taught me about rugby and spent countless childhood summers climbing mountains. True to a generation my grandfather has stories he loves to tell. None more so than the ones about his referee career.

A building unexpected – A bit like religion, rugby has buildings revered across time, continents and countries. None more so than the Northern Hemisphere – the English have Twickenham, the Scots Murray field, the Irish the Aviva and Welsh have the Millennium Stadium. So on the theme of people and rugby, I couldn’t resist a piece of verse dedicated to awe inspiring rugby cathedrals.

Religious fervour just about covers it and I’d be tempted to bet the repressive, non-conformist religious leanings of early Nineteenth Century South Wales contributed to the identification many of us place on a building. But Llanelli and Stradey Park? They have to win hands down. You read newspaper clippings, hear people talk and watch video clips, it’s a rare, very rare feeling. I actually wish I’d visited Stradey Park before it was knocked down.

Wales V England, Saturday 26 September 2015, I had a plan because a part of my brain kept telling me that we wouldn’t win, so this week wasn’t going to be about winning, but about the people you make friends with when you are the stranger learning to fit in. Instead, a busy day yesterday conspired against me posting, and I wasn’t going to post during the match!

Instead, the game deserves a plaudit; it was punishing, exciting, edge of your seat incredible. Conqueror’s in epic encounters kept ringing around in my head – injuries galore and the team have it in them to carry on to actually win it. Written in 2008 and inspired by an Autumn International that year, I wrote Pitched Warfare and for this game, that poem has to be that plaudit.

First up was actually a recent piece, when inspiration sparked during this years six nations. Meet Phoebe and Iestyn Fychan in Grammy Ffé, wholly fictional characters with a dash of magic realism thrown in – after all, the atmosphere in a rugby stadium on match day is magical and sometimes we all need a shove in the right direction to believe in ourselves.

Yes there are Welsh references, that’s me, always will be and if the game references are wrong, call it creative licence 😉

As much as this is about winning a rugby game and the building atmosphere in a stadium, it is also about knowing who you are and what you are capable of, no matter what.

A taster of Grammy Ffé:  click the image to read the story in full! 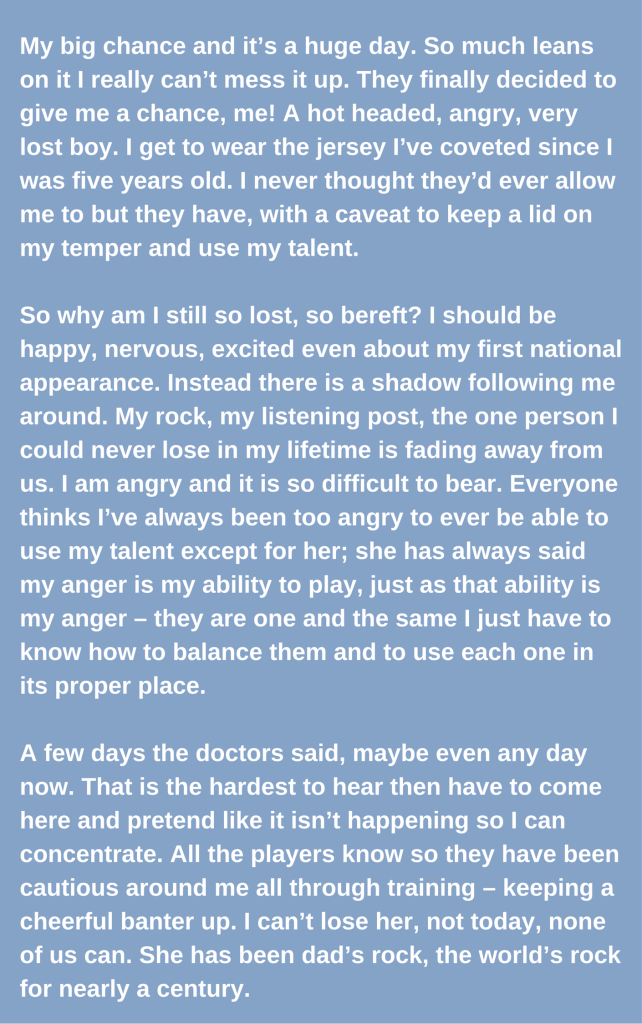 I hope you enjoy the World Cup, now it is back home.

Good luck to all the teams.