A Child’s Christmas in Wales (sorry DT!) may change on the surface as the decades go by but the activities don’t. My first task of the Christmas season? Stand on the raised garden path of Margam Park country house in the freezing cold and get soaking wet. All for a good cause though as the park is home to some several hundred deer and most years the park have put on a little bit of an introduction. With Father Christmas making last minute preparations in late December you wouldn’t think he had time to visit this little corner of the world but to the children he does. 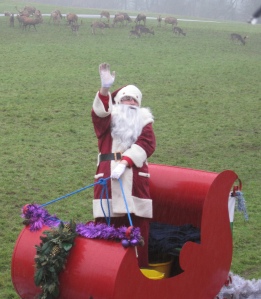 A perfect excuse for a little bit of that missing Christmas magic, and I wish I’d blogged this sooner! Live in Wales long enough and rain won’t dampen an ounce of any fun. Though as an adult you appreciate the warmth of a thick coat and umbrella a lot more.

This little trip held a special resonance for me: once it was me as one of the children waiting to see the reindeer. It has changed year on year; instead of waiting near the house to see Father Christmas we had waited at another end of the park then, there were a fair few less deer and we were allowed just that little bit closer to them and Santa actually got on the school bus to say hello. Stories have it that I shuffled into a corner of the bus as far from Father Christmas as possible then refused to get off the bus whilst he was near by. I was four! it was the first time I’d ever seen Father Christmas up close, give me some leeway…

Anyhow, back to 2014, not the 1990s… The deer came from over the hill towards the manor house, following the trail of snacks spread from the back of a tractor (also pulling the sleigh). They were a beautiful and very impressive sight to look at, loping along the fields towards us. The excitement rippling through the children as they spotted a blue and red dot slowly creeping towards them over the crest of a hill.

A great morning out for the family to enjoy at Christmas to find some festive spirit!