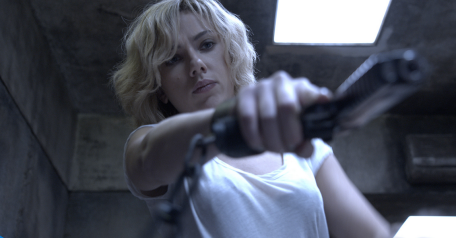 It’s not often I make random decisions to see a film but I went along and saw Luc Besson’s Lucy, starring Scarlett Johansson and Morgan Freeman. Curious about the idea behind the film I was willing to be entertained.

The main premise of Lucy is that humans are only capable of using 10% of our brain and as well as only using a small percentage of the neurons in our brains. A complete myth if you talk to most scientists. Lucy is forced to smuggle a prototype synthetic drug CPH4 across the border from Taipei, instead she is captured and accidentally dosed with it, increasing her brain capacity. When the real action-packed scenes kick in, as she fights to free herself from the drug traffickers, and would be kidnappers. Alongside this is the coincidental lecture of Morgan Freeman’s Professor Norman who depicts the scientific reason and hypothesis of humans should they gain use of more than 10% of their brain.

The film is a meld of comic book story-boarding, action thriller and intellectual analysis, it almost put me in mind of a more reality based Matrix narrative. The film transcends the scientific and enters the realm of the fantastical/magical to the point Lucy transcends out of the world completely, as if she becomes a digital based god. The futuristic super-computer she becomes ejects an ordinary looking memory-stick, a small detail but one that makes you chuckle at the mundane necessities this world needs even when presented with ground-breaking, futuristic concepts. The fact this film is European and not Hollywood in its creation is in evidence, its kitsch, silly humour of lazy continental policemen flying into action and bemused-academics completely and stereotypically out of their depths against their American counterparts.

The film itself is described as ‘A woman, accidentally caught in a dark deal, turns the tables on her captors and transforms into a merciless warrior evolved beyond human logic’ and frankly that only just covers the films own logic. Jumping across the narrative from plot point to plot point, the film isn’t long enough to flesh out anything more than the bones of the story line or even the characters surface natures.

Call me a narrative obsessive but it really wasn’t long enough – given half a chance I would have sat there for longer, just to be given that little bit more. It flitted from action point to action point with very little layering. There is a lot of surface enjoyment where the film is asking you to sit back and enjoy the spectacle in front of you, rather than get emotionally involved. With that, the film is a definite spectacle, the action sequences are thrilling and edge of your seat tense. Scarlett Johansson’s dead-pan reactions and the high-octane car chases, martial-art, gun wielding bad guys clash with perfect precision. It is her film and the action scenes that surround her own storyline seem an added and unnecessary extra.

Still not completely convinced by Lucy, it is an experience of a film, one for an afternoon of escapism and thrills now the summer has absconded. Expect to be well and truly entertained but left asking questions.

One thought on “Lucy review; kitsch, funny and completely absurd.”